The books that line shelf after shelf are standard fare for what you might find in the office of a university president—leadership strategies, apologetics, higher education pedagogy, a handful of notable memoirs and autobiographies.

But tucked in between those books on Dr. Gerson Moreno-Riaño’s shelves are ones that speak more about the man sitting in front of them and where his passions lie. Kant. Plato. Even a book on medieval kingship. One of his favorite books is “Hinds’ Feet on High Places” by Hannah Hurnard, a Christian allegory for the lesser prophets. Even more books still sit in U-Haul boxes in the corner, a casualty of moving an entire office from Virginia Beach to Grand Rapids in a matter of weeks.

Moreno-Riaño isn’t only a leader—he’s a thinker. He’s someone who ponders what it means to be a Christ follower, a scholar and now a university president. He’s captivated by ideas and the power they hold. But most importantly, he is captivated by his Creator, who has given Moreno-Riaño a relentless passion for Christian higher education.

Moreno-Riaño—a disciple, husband, father, son and leader—seeks and discerns the LORD’s guidance and serves under His sovereignty. His new role of university president is the acceptance of a calling from the LORD and a decision marked by fervent prayer, a spiritual practice he inherited from his mother and shares with his wife, Ellen.

For Moreno-Riaño, his mornings often begin in the pre-dawn hours. It is not uncommon for him to stir awake at 2:30 a.m. with an urge to pray. As a man driven by prayer and seeking the LORD’s guidance in every decision, he knows when the LORD is prompting him.

He learned the power of prayer from his mother. Ruby Moreno became a Christian because she saw the work the LORD was doing in her son’s life. And her life had never been easy. She was only 15 when Moreno-Riaño was born.

“She was a child,” Moreno-Riaño reflected. Tears welled in his eyes. “We grew up together. She has told me many times, ‘Not only are you my son, but you are my friend.’”

If prayer was hereditary, it would run in Moreno-Riaño’s family. He says he would not have come to faith if his grandmother had never attended an underground Bible study at the age of 17. The most important thing he’s learned from his mother and grandmother, Moreno-Riaño said, was to be persistent in prayer.

Moreno-Riaño does not make decisions without first consulting the LORD in prayer—including his decision to become president of Cornerstone University. He will tell you that the opportunity was a move of God. Even after his first meeting with the board of trustees, he knew in his heart that the LORD was bringing him here. He knew the LORD was moving, and He was calling Moreno-Riaño to be a part of His work at Cornerstone.

“There are things that God can do that human efforts cannot,” Moreno-Riaño said.

Moreno-Riaño’s journey to Christian higher education began long before his meeting with the board of trustees of Cornerstone. It’s a journey rooted in prayer and bolstered by bold requests and steps of faith. A journey, he says, that was entirely guided by God’s hand.

Prayer led Moreno-Riaño to be called by God to full-time ministry. But one year of school at a Bible college left him feeling burnt out and distraught. In order to finance his education, he had to work full time at night. He remembers often falling asleep in class. His grades tanked.

He returned to his home in Rochester, N.Y., wondering what was next for him. Through the mentorship of a good friend, Moreno-Riaño realized that he hadn’t surrendered his desires to God—he wasn’t allowing the LORD to use all of him.

Moreno-Riaño began applying to other colleges, but there was a problem—he wasn’t in a financial situation to afford it. He knew the LORD wanted him to pursue ministry, but how could he do that with no way to pay for a college degree?

“I prayed, ‘LORD, I want to go back to school and serve you, and you know exactly how much money I need. But please confirm to me your calling on my life to serve you and provide to me the needed monies to save for school. You know how much I need; please provide this amount,’” Moreno-Riaño said, “‘and that will be the confirmation of your calling on my life to serve in full-time ministry and go back to school.’”

He interviewed for a job in Rochester, N.Y., making eyeglasses for a Bausch & Lomb subsidiary. The man who interviewed him, a man that Moreno-Riaño described as a “French Canadian who smoked cigarettes like a chimney,” offered Moreno-Riaño a wage that was over and above what he needed to save for the initial tuition needed to jump-start his college education.

“I almost started to cry,” he reflected. It was all the confirmation he needed.

Moreno-Riaño then applied to two colleges, one of them Cedarville University. He showed up to his admittance interviews with the best—and only—suit he had.

But there was another problem—after a year of Bible college burnout, his grades were less than ideal. He had a 1.2 GPA. “I was just glad it was above a 1.0,” Moreno-Riaño remembered.

Cedarville gave him conditional acceptance—he needed to have a 3.0 GPA by the end of the semester, or he wouldn’t be allowed to continue.

“I’ve learned that when there’s an opportunity, you take it and run with it,” Moreno-Riaño said. “Because they don’t come around that often.”

While Moreno-Riaño does describe himself as “relentless,” every decision he makes is one that is guided by God’s will and a testimony of His goodness.

The Power of Ideas

Moreno-Riaño remained faithful in following his call to ministry, but he had other passions as well that began long before his acceptance to college. In ninth grade, Moreno-Riaño wrote an article for his school paper about his stance on a current global issue. A week later, his friend, whose name was—ironically—Patrick Henry, wrote a rebuttal to his essay. It made Moreno-Riaño realize that there was a war of ideas going on all around him.

“I love ideas,” Moreno-Riaño said. “They represent something powerful about what’s right and wrong, good or bad.”

Moreno-Riaño realized that he could marry his passion for ideas with his love for Jesus Christ and the gospel. Even in ninth grade, he was planting the seeds for what would become his career as a leader in Christian higher education. Later, at Cedarville, he majored in political science and pre-seminary Bible.

“My academic adviser told me, ‘Don’t eliminate either of those passions. God gave both of them to you, and he’ll work it out,’” Moreno-Riaño said.

He continued to pursue political science in graduate school. During a graduate seminar where his professor at the University of Cincinnati and almost all of his classmates were atheists, Moreno-Riaño realized that the LORD had created him to participate in the public square of ideas, just like he had in high school.

“I had these two passions in me,” Moreno-Riaño said, “The centrality of Jesus Christ and the Word of God, and the importance of ideas as representative embodiments of what some consider to be beautiful, true and good.”

“Places like Cornerstone are so important because the ideas that we offer to our students in the classroom have to be in complete concert with who God is, with His revelation of Himself and His ways in the Scriptures,” Moreno-Riaño said. “Because if they’re not, we could end up, God forbid, betraying the faith of the students who come here, which is something we should never, ever do.”

The Power of Universities

For Moreno-Riaño, Christian higher education is the vineyard he is called to by the LORD. Being a university president was not his plan until God brought Cornerstone to him. But Moreno-Riaño’s deep understanding and passion for leading students came when he began teaching.

After completing his doctorate, Moreno-Riaño returned to Cedarville as a tenured professor, knowing that the LORD wanted him to use both his faith and academic experience to teach young believers. The more he taught, the more he realized the unique opportunity he had as a professor at a Christian college. He had a classroom full of students who were hungry to learn from him and from each other.

“This is it,” he remembered thinking. “This is what the LORD has given me to do.”

After teaching at Cedarville for seven years, Moreno-Riaño went to Regent University to serve as chair of the Department of Government. In 2010, he was appointed dean of the School of Undergraduate Studies, and in 2014, he was appointed as executive vice president for academic affairs and chief academic officer at Regent.

“One of the greatest and most enduring institutions that humans have created is the university,” noted Moreno-Riaño. “They outlast everything. And that’s because human beings have a passion for truth, wisdom and the task of bequeathing these to future generations.”

When thinking about his role as university president and looking ahead to Cornerstone’s future years, Moreno-Riaño is humbled by the tremendous privilege to lead such a pivotal university as Cornerstone. He recalls the importance of being true to the founding ideals of Cornerstone—the gospel of and centrality to Jesus Christ. The importance of this founding vision and the role of university president in protecting and reminding the community of this founding vision cannot be overstated, according to Moreno-Riaño. He has said many times that serving in Christian higher education is one of the highest callings in which a person can serve—and he’s just getting started.

“This is just the beginning, amen?” he said with a smile. 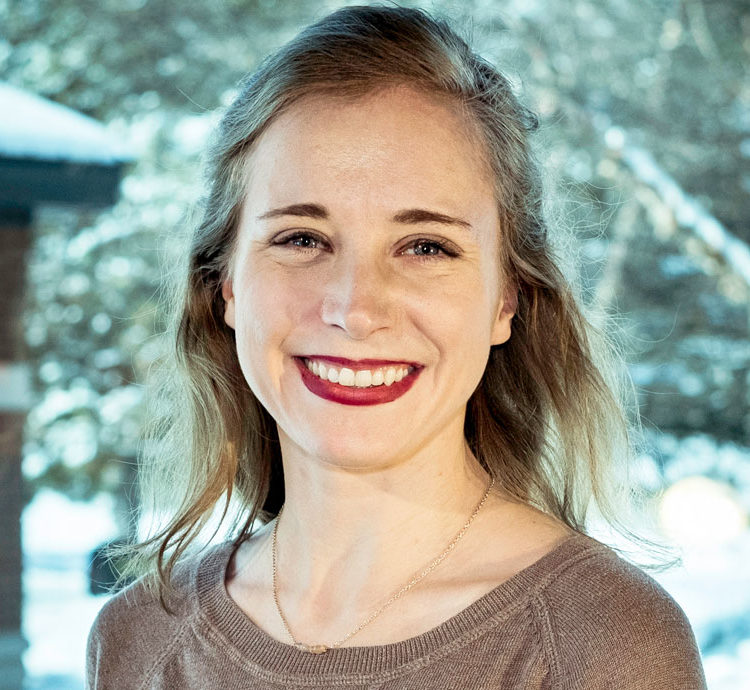 Audrey Wierenga (B.A. ’18) is the copywriter for Cornerstone’s Marketing & Communications Office. She graduated from Cornerstone in 2018 with a degree in broadcast communication. Audrey also serves on the Young Alumni Council.

In her spare time, Audrey enjoys working on her own full-length work of fiction, co-hosting a podcast about the Academy Awards and participating in local theatre productions. 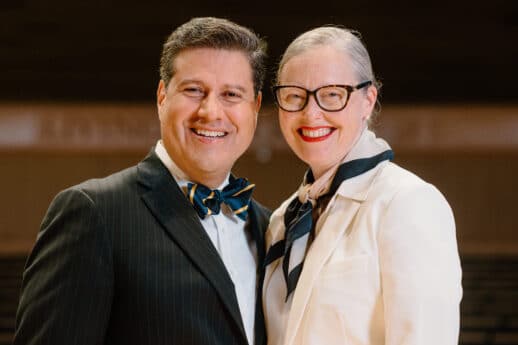 Ellen Moreno-Riaño: A Heart for Understanding 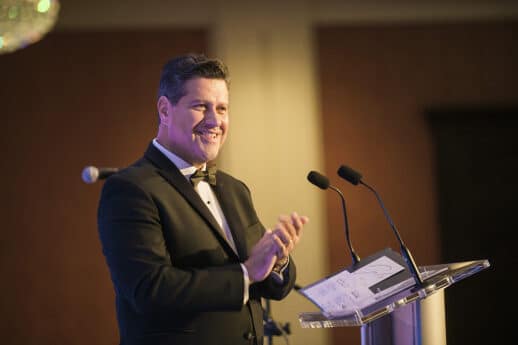 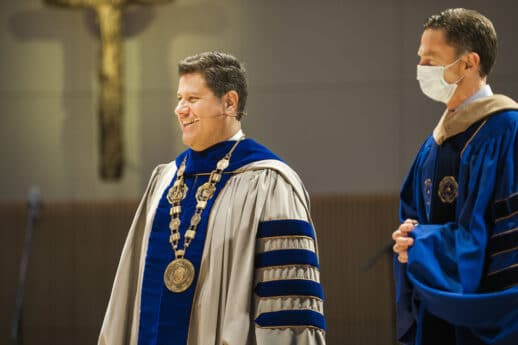